For today’s post, a representative from Lelo asked me to review their new product, the Tor II. Lelo provided the product for review. 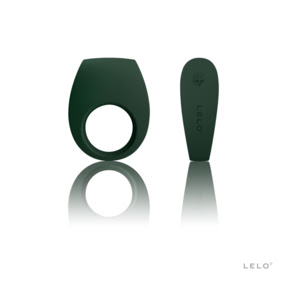 The box arrives, sleek, black and modern, as if it were designed by Apple. We open it to reveal a cock ring and a small charger.

The Tor II is small enough to fit in the palm of my hand. My partner looks skeptical. The finish is pleasing, luxuriously silky to the touch.

“It’s really stretchy,” I say hopefully. I plug it in to charge and press one of the buttons on the side.  It makes a low whrrrrrrrr sound.

“Oh.” I’m disappointed. I can barely feel it vibrate.Then I press the button on the side again. And again. I click it a few times, as high as it will go. It nearly vibrates off my hand.

I let it charge for a couple hours, then we take it out for a spin.

We climb into bed, he lubes his cock and the inside of the ring. Just as I predicted, it stretches out far enough for him to fit into. We crank it to eleven and I lay on my back. I grab his cock, feel the vibrations down his whole length and pull him into me.

He enters me, fucking me hard, then slow. We try several variations of the missionary. The cock ring vibrates strong and steady, it’s definitely pleasant, but it’s not blowing either of us away. Until…

“Let me come at you from behind,” he says.

“For science!” I agree. I get on my knees and he slides in me with the TOR II going full blast.

“Ooooooh,” I exclaim, “This is good, no, I take that back, it’s…ooooohhh…WOW.” My ability to form words suddenly short circuits as the vibrations hit the right spot.

“I want to try something else,” he says.

“Can we write this sex off on my taxes?” I ask as we pause, “I mean, it technically is work.”

He pulls the TOR II off his hard cock, and then tries to pull it over his balls. It takes a minute, the device isn’t that stretchy, but he manages to pull everything through.

“Ahhhhhhh,” he leans back a moment, eyes closed. I place my hand on his balls, everything is humming along nicely.

I get back on my knees and he enters me again.

The sensation on my end is significantly dampened, but he’s clearly enjoying it more now. I reach around and hold the toy and his vibrating balls up against my clit. It still feels good, but it’s not as strong for me in this configuration. Normally he’s really into having his balls restrained when we fuck, the strong vibrations are only adding to his pleasure.

He’s still excited and I’ve had several small orgasms by this point, so I ask him if he wants something else. I offer to peg him with the TOR II around my strap-on, but he’s enjoying the sensation on his balls to much to take it off.

I give him a good hard ass fucking, and after he comes, he takes the cock ring off. I slide it around my cock and tell him to feel how heavily it vibrates.

“Next time,” I answer with a smile.

We’re both genuinely surprised and pleased with the entire product. The small size of the ring doesn’t get in the way, there aren’t any odd or rough corners to distract from the sensation. It’s very well made and completely waterproof. It’s on the expensive end, a bit over one hundred dollars, but I think it’s well worth the price. This toy is going to be a favorite for a long time to come. Simply put, it’s fucking amazing!

The only thing I didn’t like was trying to turn it off. There are inset buttons marked + and – on either side. To turn it up you have to repeatably click the plus sign, to turn it down, you push the minus sign, but there is no instant off switch. It was rather difficult to turn it off when my hands were covered post-sex lube and (ahem) other slippery substances.

Get yours here and let me know what you think! Questions? Leave ’em in the comments and I’ll answer them.

16 thoughts on “Review of the Tor II from Lelo”

Warning: This blog contains adult content and may not be suitable for those under 18 years of age.